The Illumi-Nerdi's Behind the Writing 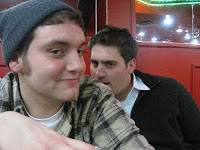 The blog has been doing amazing. We’ve reached 35,000 views in 9 months. Who would have thought two young adults from Long Island would have interviewed incredible writers (Anthony Ball, Scott Lobdell, Kurtis Wiebe and Adam Beechen) and one awesome artist (Steven ‘Sash’ Scott)? When we first started the blog, we had one goal, and that was to slowly but surely introduce our comic book. We have done a little bit of that, but not as much as we hoped. Truth be told, we’ve had too much fun reviewing books, coming up with top ten lists, and interviewing comic book creators.

When Brian and I first started writing comic books, we thought we knew what we were doing. We had a notebook, a pen, a little bit of ego, and dreams of creating characters that people would beg to read. A few months ago, we submitted our first ever comic book script to be critiqued by Comix Tribe’s Steven Forbes and Yannick Morin. Brian and I were so excited. We had this idea in our heads that they would say “You guys rock, this is inspirational…yada yada”. Well, that was so far from the case. We sucked and it bit hard. Several emotions ran through me: denial, anger, sadness and finally reorganization. After a day, we realized that we needed this critique. We weren't as good as we thought we were and we are determined to change that.

Recently, we realized that we had strayed away from our original mission. For the rest of the summer, we will be introducing Phase 2 of the Illumi-Nerdi's Master Plan. Our master plan consists of 100% interaction with fanboys worldwide. Unlike professional and amateur creators, we are doing what has never been done. You, the fan, will be able to see our failures, our achievements, our fights and the construction of our comic book.

Here are a few of our plans for the rest of the summer:

1. Artist Deathmatch: If you aren't aware already, we are in the final stages of the Illumi-Nerdi's Artist Deathmatch 2.0. Unlike the first Artist Deathmatch, we are having the artists create our characters. If you haven't voted for your favorite, do it now...or we will hunt you down.

2. Vote for Our Comic Book's Title:The People's Choice: At the moment, we are asking our fans to vote for the title of our comic book. Here is the link to our comic book's concept. We've heard people's complaints about the choices and there is a good chance we will be doing a new comic book title poll again in the future. Until then, vote for your favorites. Our comic book is "superheroes minus the costumes and add the drama that can be found on The Sopranos or Lost". Our goal is for the reader to realize that superheroes are just like us. They have thoughts on politics, abortion, sports, and more.

3. A Possible Movie Trailer: For the past week, I've been intrigued in doing a movie trailer. It would be like a reintroduction to the creators of the Illumi-Nerdi. Does anyone know how to use the IMovie application?

4. Movie Posters/Pin ups: This has been something I've wanted to do for a few months now. It is a simple tease with one character on each poster. For example, one of our characters would be drowning in a pool of money. The sentence would say something like" Shepherd: Where Corporate Sellouts are Born".

5. Videos, Videos, Videos: We actually tried this once but the internet went down and the video was never saved. I think it is important to ensure that each video is no longer than 3 minutes long. The average American is bored within 3 minutes into a 10 minute long YouTube video. In these videos, we will discuss and debate the importance of certain characters.

6. Creation: Each week, one of us will write up a quick post discussing something from the story. It will include our hopes, our dreams and our fears.

7. Our Top Ten: Usually, people want three reasons why they should read a comic book. Well, we give you ten! For example: Death means death. Yes, we are serious! Now, give us your money and enjoy the book.